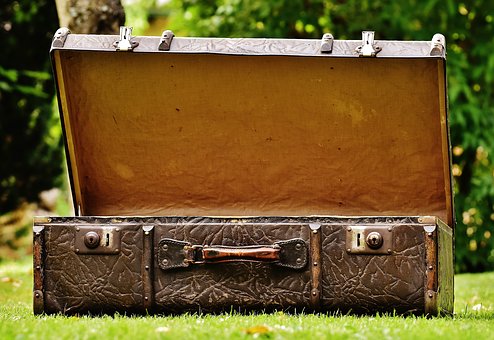 The crestfallen man firmly held his old suitcase which had travelled with him nearly all around the world. In times of splendour it went with him everywhere and it seemed that this suitcase shone, not because it was new but because he was a man that was appreciated wherever he went. Friends and enemies would fight to be able to see him or just to ask his opinion, because he believed at that time that he could touch the stars with the tips of his fingers.
But all that had changed. He suddenly found himself alone in an antiquated hostel in the old town of that province and placing his suitcase on the bed he looked at it and did not know whether to open it or simply leave it there and contemplate it, recalling all the places in the world they had been together.
He sat and stayed for a long time wondering what to do and how to start afresh.
He was being punished for breaking one of the golden rules: “One must never fight against fools with their tools!” He was aware that his punishment was going to be a long one. He did not know how long it was going to last but his sadness took over his heart, this heart that he thought had been capable of giving its utmost, or perhaps not. It had simply done its best to give and sow with the hope of one day reaping at least a small fruit. But in his heart he knew this was not going to be the case.
In the end he decided not to open the suitcase but to venture out on to the street; he needed to be with people.
He walked and walked trying to recognise a friendly face and strained to see if within those people he could find some human warmth which he had on occasion, given to someone else. But as time went by, and the more he walked, a suffocating feeling made him realise for the first time that he was in a strange city and the more faces he saw the stranger they became.
He approached a small bar and sat at one of the few tables that were on the terrace and for the first time felt alone and began to cry. Tears did not fill his eyes but his heart cried. Nothing and no-one could console him. He could only think of man’s evil. He thought he would try to remember how many good hearted folk he had known but suddenly he did not know how or could not count them. It was more than he was able to do and his tears and emotional state would not let him.
After a while he realised that a part of his life had come to an end and, looking up to heaven, could do no more than try to take refuge in his faith; his faith in God, although he realised that this was no longer fashionable. Man in the end is just himself and his possessions.
He suddenly thought that perhaps it was all a punishment; a way of showing him a new life, that even though it may not be to his liking, he had no alternative but to accept it, as something superior to him had decided it was to be that way.
After asking for something to drink he thought for a long time and threw back the drink, to try to quench his thirst.
He started to walk again without knowing where he was going until he was tired and returned to his sad hostel, opened the door and the first thing he saw was that his suitcase had remained on the bed and he finally decided to open it. When he did so he could not contain his surprise as he realised that everything that was in there was pure vanity and hot air.
TOMAS CANO